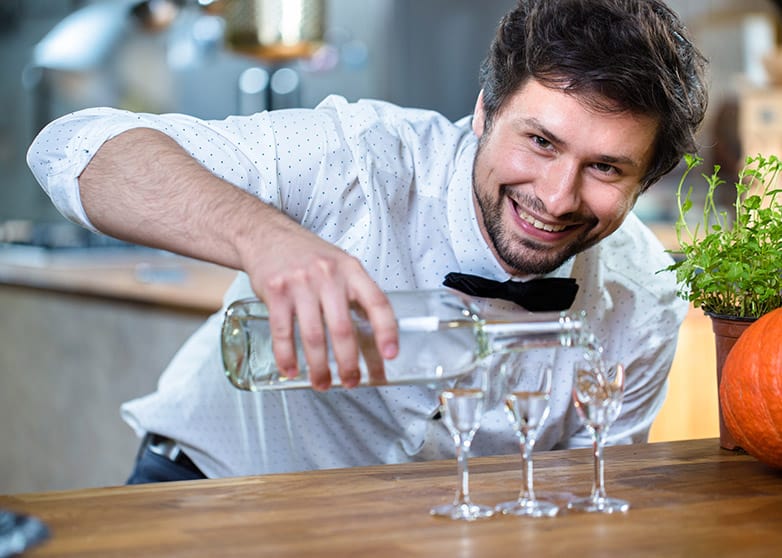 Michał founded Eat Polska back in 2013 for two basic reasons. One, being in love with Warsaw, he worked as a city guide and noticed there was no-one to explain Polish vodka culture to visitors. Two, being in love with vodka (hey, ‘in love’ doesn’t mean ‘alcoholic’!;), he wanted to share the stories and convince the unconvinced. Teaming up with Magda Gendźwiłł led to an ongoing culinary adventure that he’s extremely proud of. Over the years, Polish food and drink started to play the main role in his life. If you join his tour, you’ll never say ‘vodka doesn’t have taste’ again and you’ll end up with a bunch of restaurant recommendations that will be enough for 5 visits to Warsaw (but do start with chef Andrzej Polan’s one!).

Meet Michał on the Food Tours and Vodka Tours.

Beata is wholeheartedly a Varsovian. Born and brought up in the Polish capital she has worked as a guide for the past few years, showing Warsaw from historical and cultural perspective. She joined Eat Polska to accompany visitors to Poland while they get to know her country through a kitchen door – literally speaking! When June comes she eats nothing but strawberries and is a great fan of anything fermented you can find in Polish culinary tradition (her dad is the master of the ceremony when it comes to gherkins – we checked!). Beata’s interest in culinary topics started when she read a new edition of the oldest Polish cookbook (written in mid-1600s!).From then on, she has appreciated not only the wisdom of the past generations but also those chefs who have been giving new life to local and seemingly obvious flavours turning them into intense and surprising mind-and-taste-buds blowing experience (shout out to Aleksander Baron here!).

While on tour with Beata, expect anthropological approach to food and finding collocations of vodka labels with great literature. Na zdrowie!

Meet Beata on the Vodka Tours. 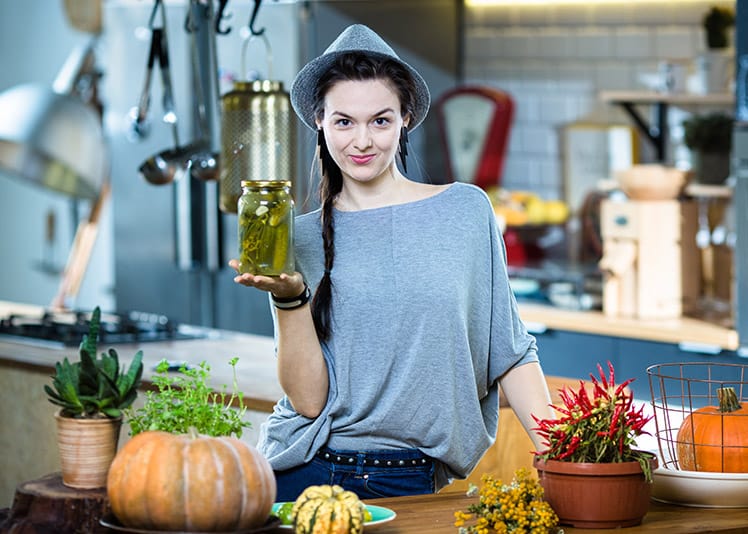 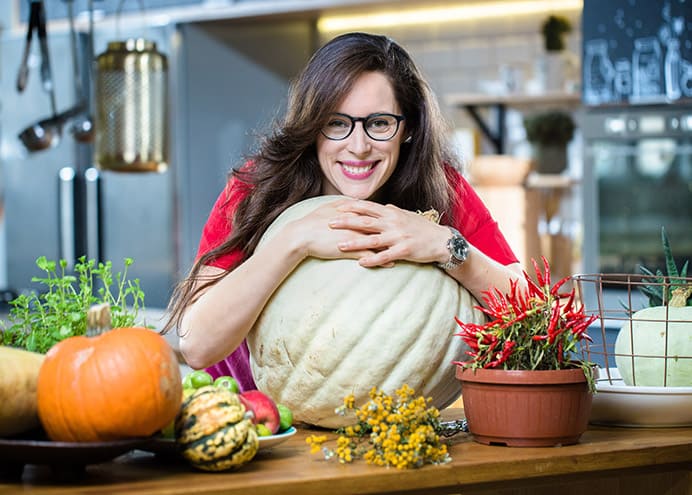 Marta has been living in Warsaw since the day she was born and is not planning to leave the city anytime soon. Apart from giving the awesomest food tours in town, she is an academic teacher and does communication for an NGO engaged in Polish/Jewish dialogue. When time allows, she is also a translator and interpreter working mostly in film. Her relationship with Eat Polska begun before the company appeared, as she was the one to introduce the two minds behind the concept to each other. Once the idea took off, she wanted to join in. Marta is an enthusiastic baker, but a shy cook. She takes after her grandma, who though couldn’t cook to save her life, was amazing at taking people to restaurants. Foodwise, she loves all things Asia-inspired or served in a bowl. Because of that genetic predisposition and slightly sarcastic personality, Marta’s tours are a unique combination of chill and information with a high joke density. She might chew your ear off with all the trivia, but don’t worry! She does have an off switch.

Meet Marta on the Food Tours.

Anna’s been a food tour guide for almost two years. She joined Eat Polska because she was instructed so by her friends who couldn’t take her excessive babbling about food anymore. They thought she might find someone who would be actually interested in what she had to say about bread kneading techniques, Polish vineyards or renaissance of  homemade lard. And so she did. Since 2015 she has been sharing her passion for Polish food with our Food Tour guests. She has been striving to convince them that Polish pickles are the key to longevity and that somehow beetroot soup is one of few things in life they should never say ‘no’ to. She loves to believe that her signature dish is an elegant trout en papillote, but people say they prefer her garlic on bread snack.

Meet Anna on the Food Tours. 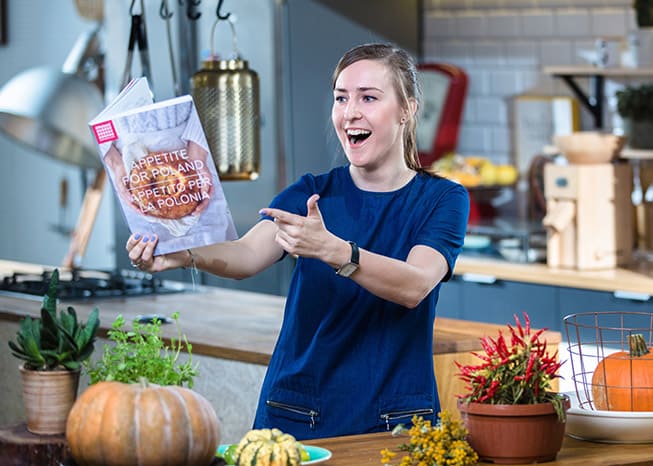 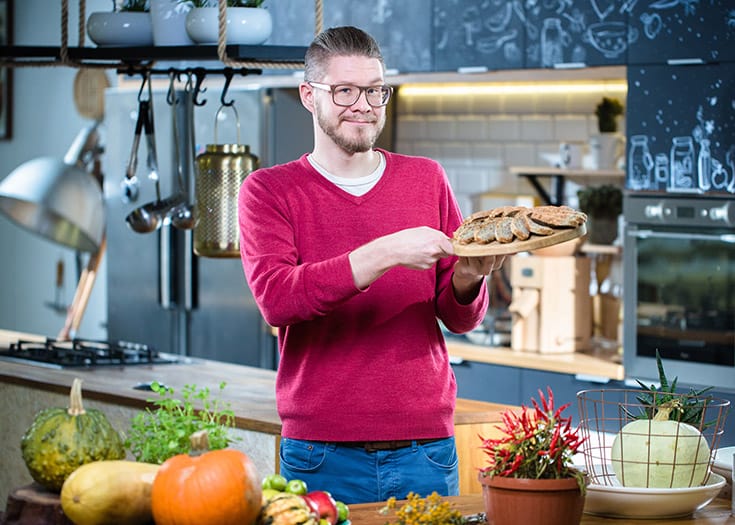 Another Michał in our ranks (he goes by Michaś to stand out) is a native of Warsaw, and the parts of the town far off the beaten track make up his preferred stomping ground. When not out giving a tour, he revels in his fabulous side gigs: film translation and cooking up TV trailers for cooking shows—hilarious puns included (did you spot this one?). While guiding, he’s always eager to explain the social, economic, and even chemical factors which helped shape traditional Polish food and drink. Want to know what we ate 500 years ago, or when we stopped having beer for breakfast? Join Michaś for a delicious crash course in the what, where and why of Polish customs.

Anna was born in Warsaw and is a licensed tour guide and also a translator/interpreter. Perhaps the fact that she spent most of her childhood abroad triggered her fascination with something she discovered was unique to her country: Polish-style feasting traditions and rituals, which include the “art” of vodka drinking.  After years of gaining experience as a practitioner, came the time for Anna to share her expertise on the matter with guests from around the world. She therefore joined Eat Polska as she believed this is the right place for her to become an on-site Polish Vodka ambassador and to offer her guests a holistic vodka experience.

Meet Anna on the Vodka Tours. 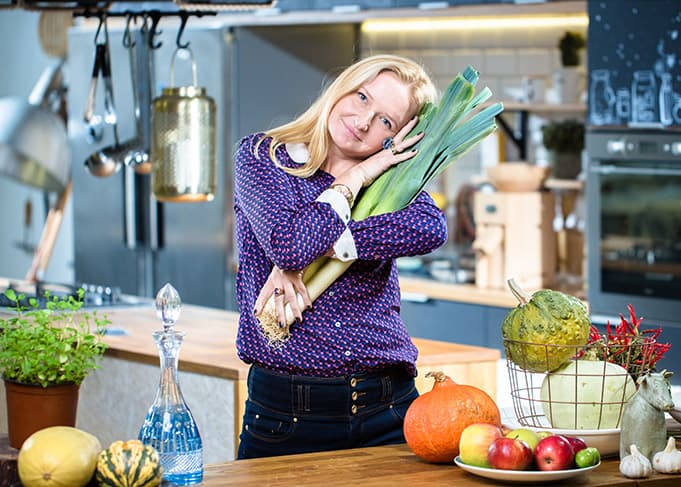 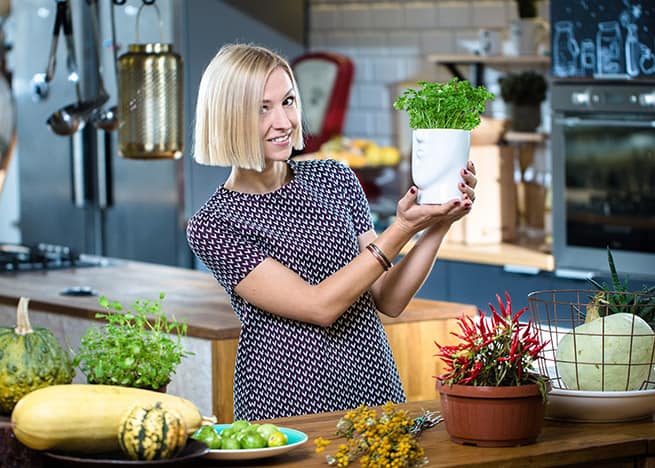 Eliza loves anything starchy, she sometimes thinks she must be made of dumplings and potatoes. Based in Warsaw, she runs both culinary and vodka tours for Eat Polska, sharing cultural information, family stories and food- and vodka-related anecdotes with her guests. Eliza’s favourite Polish dish is… the Lithuanian cold soup. Sounds wrong? She loves to get that puzzled look! The soup actually makes perfect sense in the Polish culinary repertoire and she’ll be happy to explain you why. If you can’t find her in Warsaw, Eliza is likely roaming around Central and Eastern Europe, leading small group adventure tours.

Meet Eliza on the Food Tours and Vodka Tours.

Ola, born in Częstochowa, but her heart has always belonged to Warsaw. Apart from eating or talking about Polish food and traditions, she teaches English and runs along the Vistula river. Why Eat Polska? It combines all she loves! Cultural exchange, food, people and stories… Her food passion could not exist without food blogs, web series about chefs, reviews of the restaurants and cooking books! She cooks if she has time, mostly Indian and Italian cuisine, leaving all top Polish foods to her grandma. If there is any new food market or food event in the city, she’ll let you know!

Meet Ola on the Food Tours. 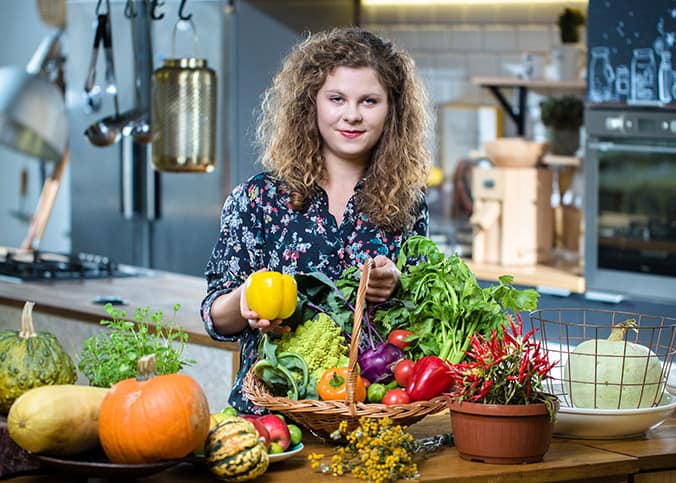 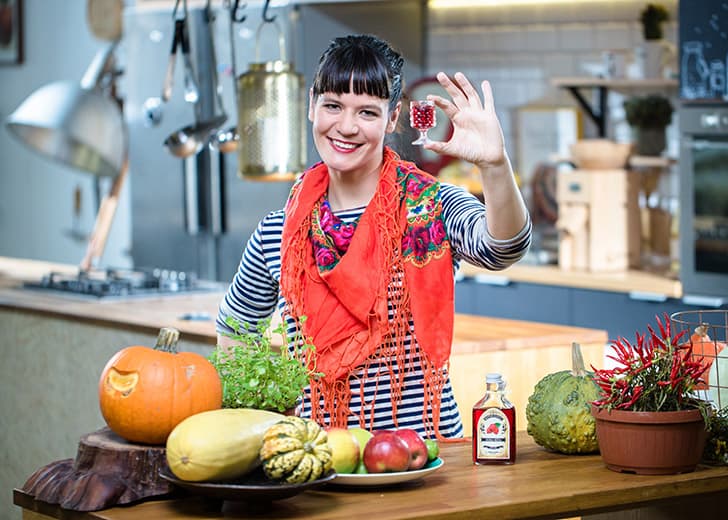 Gosia has lived in Warsaw almost all her life and sees this fact shaping her professional life – in many respects, all her jobs involve introducing others to her hometown. She feels that vodka – perhaps not unlike Warsaw – is the underrepresented and not-fully-discovered treasure of Polish heritage, especially for visitors from abroad. She employs her gift for storytelling and strong head to show tour participants how vodka can be a guide through the complex history of her country. In her spare time, she explores Poland off-the-beaten path and enjoys hunting for best lunch special deals.

Meet Gosia on the Vodka Tours.

Anna graduated from the English Philology Department of Warsaw University. She is a food historian and a keen cook, Polish cuisine being her specialty. Apart from teaching and working as a food tour guide, she gives cooking workshops and works in catering. She learned to cook  from her Typical Polish Grandmother (Who Does Nothing But Feed Everyone), so you can ask her for recipes for Polish dishes.  As a hobby Anna cooks (just for a change), breeds dogs and listens to punkrock.

Meet Anna on the Food Tours. 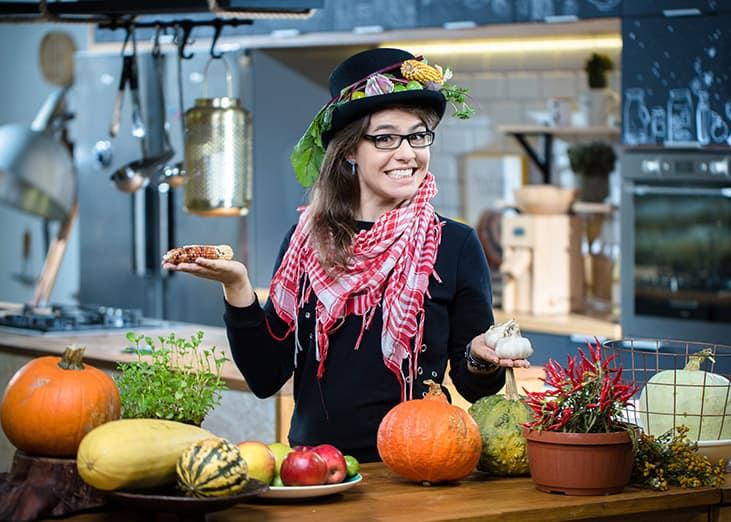 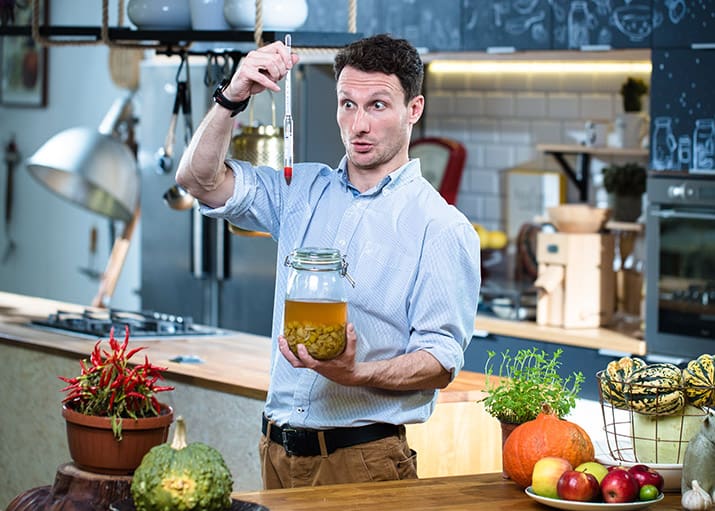 Varsovian to the bone, vodka expert and culinary chef. Years of experience as the restaurant manager have brought him to Eat Polska. In his laboratory he tests vodka recipes: those medieval and following modern trends. Fasten you seatbelts, his tour may be a rollercoaster back in time! In the kitchen, all of a sudden, Michał turns to a chef, exploring Polish cuisine. If you want to find out about how Polish people cook, what do they eat, how our food was changing over the centuries and why, he’s the man to ask. He will teach you how to prepare the Polish greatest hits. Also will not leave any of your questions about vodka without an answer. And you without a snack. Wait a second – did you say you want a coktail?

Dawid has been our guide since 2017

Meet Dawid on the Beer Tours. 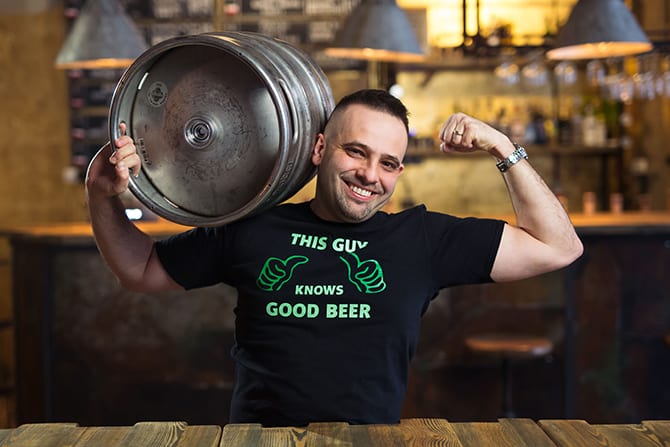